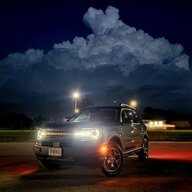 Loch Lomond: My wife and I went for it in the Bronco Sport Badlands. We decided to try and head to Loch Lomond near Saint Mary's Glacier, CO. In AllTrails, this trail is listed as moderate and the pictures show nothing but the beautiful lake, streams, and waterfalls. It's almost like people don't want you to see the journey to get there. The trail was busy. I had a Nissan Xterra in front of me, and a lifted 4Runner TRD Pro behind me. There were two skid steer loaders on the trail trying to repair severe washout before you ever got to the fun stuff later on, and we had to make way for two vehicles coming from the direction of the lake. Then we drove through a gate and that is where things got really fun, really dangerous, really quick. We have limited pictures and video because my wife had to drop her phone and hold on. We are talking boulders the size of shopping cart baskets all over. There were some areas where you could pick a good line and go slow and you would be just fine, but there were more "pick the best line you can and hope you don't bottom out areas." We made it about half-way before I decided it was better to be able to drive my machine back to Missouri with my family, than make it and get stranded afterwards. In the end, I hit the bash plate twice and scraped an LCA once, with no visible damage once off the trail, so I feel blessed. Once again the Badlands could have made it because it is a goat. I just wasn't willing to risk the amount of torture it could take before something broke. Here are the "honest" pictures of Loch Lomond trail rather than just the pretty areas (at least what could be safely captured before being tossed about the cabin because of the large rocks). So finally my advice; If you don't have a lifted vehicle, with good A/Ts or M/Ts and 31s or 32s, I would not attempt this trail. This trail earned my first pin stripes on the BS Badlands. As always, pictures never do trails any justice. I guess we got far enough though that AllTrails gave us credit for completion.