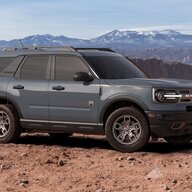 Most 2021 Ford Bronco Sport's sold will be a lower trim level like base, Big Bend, and Outer Banks, and according to our test results, the folks buying them should be happy with the balance of midpack performance and off-road capability. The people who really want to get off the beaten path, though, will pony up for the hardcore Badlands off-road trim level (or they got one of the limited number of sold-out First Editions), and they'll get a lot more than just knobby tires.

It's technically a trim level, but it's more instructive to think of the Bronco Sport Badlands like you would think of a Trailhawk Jeep (or a BMW M car, if you're not an off-roader). It's a complete package of off-road hardware, not just a bundle of options. It starts under the hood, with the standard turbocharged I-3 replaced with a 2.0-liter turbocharged I-4 making 250 hp and 277 lb-ft of torque. In the rear, the standard all-wheel-drive system replaces the differential rear axle with a twin-clutch rear axle. By putting clutches on the axle half-shafts, the system can vector torque side to side by slipping and locking either clutch as needed. It can also lock both clutches to effectively create a virtual axle locker. At the corners, Ford fits different shock absorbers, with hydraulic bump stops built into the front shocks to better take big hits. All-terrain tires are standard; knobbier, more aggressive all-terrain tires are optional. Underneath, skidplates protect the engine and transmission assembly and the gas tank. Extra G.O.A.T. off-road modes in the software offer better performance in specific off-road conditions.

As you might expect, all the extra hardware adds weight, and the Badlands tips the scales almost 100 pounds heavier than the nicely equipped Bronco Sport Outer Banks trim. It also has 69 more horsepower and 87 more lb-ft of torque, so the extra heft really doesn't matter. With the 2.0 on board, the Bronco Sport jumps from the middle of the pack to the front, at least in terms of acceleration. Needing just 6.5 seconds to reach 60 mph, the Badlands is more than 2.0 seconds swifter than other Bronco Sports and quicker than most of its competitors.
It might be even quicker if it accelerated smoothly. After testing, road test editor Chris Walton reported: "It launches pretty well, but there is turbo lag. It falls out of the power on some upshifts, then the turbo hits and it surges back, but not all shifts. The gear spacing is unusual: There are short gears and tall gears and slow shifts and quick shifts. I'm not sure what's going on here. You can see all of this on the acceleration curve. It's all wobbly."

In addition to smoother power delivery, street-friendlier tires would probably make this Bronco Sport quicker, too, but that's not why you buy a Badlands. If you're getting the off-road model, you should get the most aggressive tires that make it the best off-roader it can be, and that's what we did. Knobby all-terrains aren't as good on the street, though, so they give up traction when accelerating handling, and braking.
Pulling 0.76 average lateral g on the skidpad and putting up a 28.4-second figure-eight lap at 0.59 average g puts the Bronco Sport at the back of the class, just ahead of the equally off-road-focused Jeep Compass Trailhawk. Needing 123 feet to stop from 60 mph only drops it to the lower middle of the pack and still ranks it ahead of several competitors on street tires. It's also 8 feet farther than the Outer Banks needed.

The good news is these limit tests don't reflect how the Bronco Sport Badlands drives every day. As we noted in our First Drive, the Badlands handles nicely enough, has plenty of freeway merging and passing power, and brakes confidently. Our testing revealed Ford's stability control program is very aggressive on the Badlands, so don't let the low grip numbers fool you into thinking the vehicle doesn't handle well enough to be safe. If the computer had backed off (it can't be fully turned off), the numbers would likely be significantly higher. You'll feel the disadvantage of weight and off-road tires most deeply in fuel economy. Per the EPA, the Badlands gets 21/26/23 mpg city/highway/combined. The Outer Banks does 4 better in the city, 2 better on the highway, and 3 better combined, and it was already near the bottom of the class. The Bronco Sport Badlands finishes the job, moving the rest of the way to the bottom.
By the numbers, the Badlands is a mixed bag, quicker in a straight line but less capable in a corner. Street performance, as we've established, isn't the measure by which we should judge the Badlands, though. It's informative, but you know going in you're trading some on-road performance for a lot of off-road performance. When you consider how the Bronco Sport Badlands performs in both environments, it's clear to us Ford has struck a fantastic balance.

These are their tested specs, not Ford's numbers. The 0-60 is what I expected, some other review had it much lower.